Roger was born in 1839 at Piercebridge, County Durham, 5th son of William Wilson and Mary Marriner. While his father and older brothers were Blacksmiths, Roger's occupation on every census is 'millwright' and later 'Foreman Millwright. By the time of his wedding, on September 29th 1861, his address is given as Wharf Street, Durham. However, his marriage to Mary Ann Maddison, took place at The Parish Church, Leeds. Yorkshire.

This splendid example of Gothic Revival architecture has been Leeds' parish church since 1841, when it was built to replace a medieval church that had fallen into disrepair. Thanks to some unsympathetic town planning, the church is somewhat cut off from the city centre but it is definitely worth taking the time to find. The interior is particularly stunning - look out for the original Victorian fittings that reinforce the High Church atmosphere. Guide book available.

Their first child was born in Leeds, but then the family moved back to Durham and in 1869 when my grandfather, Edward Maddison Wilson was born, he is shown as living at North Road, Crossgate, Durham. We have visited that street and there are no traces any more of the houses once there, although just up the road is St. Margaret's Church, where many weddings, christenings etc for the Wilsons took place.

Later, in 1881, the family has moved to Durham Road (no number given) Bishopwearmouth, Sunderland, where his family has grown to seven children. Mary, William, Edward, Margaret, Emily, Roger and Thomas. By 1901 census, Roger and Mary Ann live at 5 Green Terrace West, Sunderland. He was a millwright every time his occupation was mentioned, and in 1901 at age 61 he is described as a "foreman" millwright. Emily is still living with them and is now a school-teacher, and their daughter Mary, now Mary Forbes, with two children, Alexandra and Frank, is their house-keeper. A six year old, Harold Middleton Wilson, also lives there, the son of the unmarried Emily. We don't know when Roger died, but as he was alive in the 1901 census, it is reasonable to assume he was still around when my Dad was born in November 1901. 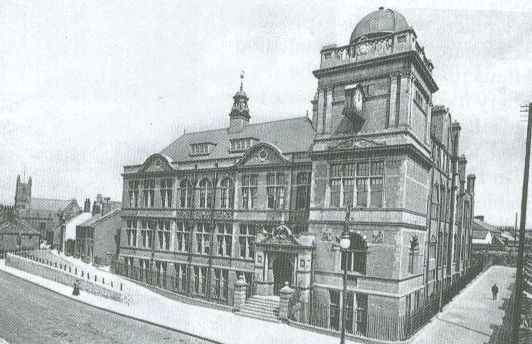 A famous building in Green Terrace. Circa 1900

A Millwright was a highly skilled and specialised fitter who erected engines in proper alignment with pulleys,
shaftings, transmission gear, etc., having regard to friction, tension, vibration and other factors which aided or
prevented efficient working of the plant. The term originated in corn mills, etc., where water power was used, when
the tasks of fitting, erecting, gear-cutting, etc., both in wood and metal, were performed by a millwright.

Roger died in June 1906 at the age of 66. This is an extract of a list of wills, from which we see the occupations of two of his sons...

Therefore, Edward Maddison Wilson and William Wilson have moved away.

It's right age and right town