Links to my other sites
These reminiscences of life in the early 1950s in Selbourne Road, Gillingham, Kent, England, are at the request of my young wife, so that our daughter, who hasn't been conceived yet, but who will be born and raised in Southern California, can read in wonderment, and then tell her grandchildren all about the totally different way of life way back then……..

Well, Madison Rose, when your daddy was born, my Mom and Dad lived in a terraced house named 10 Selbourne Road, Gillingham in a far-away land called England. When I was born, the house had an outside toilet. Yes, if you needed to go to the bathroom, you went out the back door just a few yards and then In to the toilet. A small, cramped room which probably would not have had its own electric light, so in the evening you would have had to take a flash-light with you. Long before I was old enough to take MYSELF to the toilet, the door had been bricked up, and the wall between toilet and bathroom had been demolished, so we could enter the now joint bathroom and toilet from INSIDE the house. 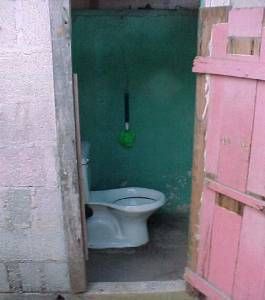 This isn't OUR outside toilet, but you get the general idea. Now when I say 'bathroom' this was not the sort of bathroom YOU will know. For a start the bathroom had only a small basin with running cold water - no hot water tap. There was no shower - very few houses in England would have had those at that time. The bath was made of tin and could be moved in or out of the bathroom at will. There was certainly no heating in the bathroom either so in the cold (and I do mean COLD) nights in English winters, you certainly didn't want to take a bath, and it was in and out the toilet as quickly as you could manage. Nor was there any 'dressing-table' or counter. I remember a mirror but that's all. And later a bathroom cabinet. Before then we kept toothbrushes etc in the kitchen. Many people from all over the world have sent me their own stories about life in the fifties. Please click HERE to read their fascinating tales. If YOU have a story to tell, please contact me at BobWilsonGFC@aol.com How did we get hot water for the bath? It was from something we imaginatively called a 'copper' because it was made of .... copper. It stood about three feet high and we kept it in the kitchen filling it up with cold water and then standing back and lighting a gas burner under it. It took a long time to heat up but when it was ready we undid a tap in the side and drew the hot water out into metal buckets, then carried the buckets into the bathroom to fill up the bath.

I often saw my Dad having a bath in the living room, particularly in the winter when it was too cold to use the bathroom. My mom would cover him with a towel when he got out. But all things change and progress, and eventually we had a real bath put in in the bathroom with hot water taps as well!

But when Dad had his bath in the living-room it was because it was warm and cosy in there. Not because of the warm-air central heating because we didn't have that or anything like it. It was because we could place the bath in front of the roaring fire. In the fireplace. Yes, we had an open fire, with thin metal gauze guard around it. In the fireplace we would burn coal. Maybe some screwed up newspapers and pieces of wood to set it going, but then we put lumps of coal on it to give out a warm glow. For many years that's how we toasted bread, by putting the bread on the end of long sticks and holding it close to the fire.

This made yummy toast!

But we had to get the coal to put on the fire, and it was delivered to us once or twice a month by the coalman. He would come round to our back yard (we called it a garden) with one sack at a time on his back and pour it into the 'coal box'. This was a small wooden container built against the back of the house, backing on to the bathroom. It had a lift-up top, but when we needed to take some coal into the living-room fire we opened a small hatch in the side and 'shovelled' some into a 'coal-skuttle' (a sort of shiny metal bucket). 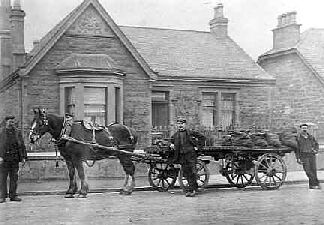 OUR guy had a truck, but even in the 50s there were still SOME horse-drawn deliveries. We used to follow the horses to pick up (not in our bare hands) the horse manure for the gardens!

When the fire went out, the ashes had to be swept away, or else they would catch fire the next time you lit one, so we had to have fire-tools by the side, a brush to collect the ashes in one pile, a shovel, to brush them into, and a poker, literally used to 'poke' the fire when it was getting low. And soot used to accumulate in the chimney so we had to call in the 'chimney-sweep' every now and then. He would have huge long brushes that he would push up the chimney bringing down soot everywhere. It was such fun (well maybe to a young child, but not to Mum who had to sweep it all up)

In those days almost everything was delivered to your door. Mr Ballard brought us two or three bottles of milk each day for years.

Amazingly, Mr. Ballard's son, David, saw this site and has kindly sent me a photo of his Dad with horse and cart taken way back in the early 50s! 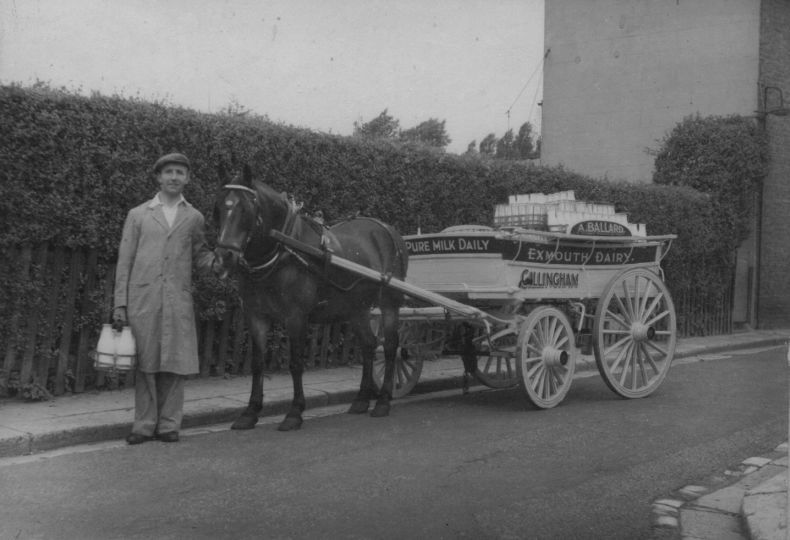 Mick the baker brought us two fresh-baked loaves of bread (and I mean REAL bread, not this American muck you have to eat) to our door for just as long.

Going back to "The Copper", it had one more use. It was a primitive washing-machine. We used to stuff all our clothes and towels etc into the copper, fill it with cold water then light the gas under it. Add some washing-powder then sit down for an hour or so, occasionally stirring the clothes with an old stick. Once the clothes were 'done' we would have to carefully pull them out (that water was HOT!) and begin the process of drying them. First off was to put them through the 'mangle'. This was a machine consisting of a turning handle which turned two wooden rollers. Each article of clothing or towel etc was fed between the two rollers and the handle turned so the rollers would SQUEEZE out the moisture, before we then took the clothes and hung them on the outside clothes-line using pegs for the wind to dry them. 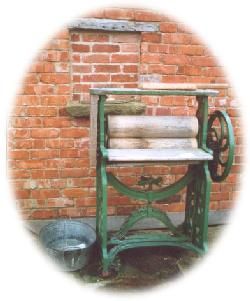 Our mangle was a bit more modern than this, but you get the idea...

My Dad was one of the very few people in our street to own a car. In fact in a street of possibly eighty houses there were usually no more than six or so cars parked. Nowadays (2003) the street is so packed with cars its often difficult to drive down it, but back then Dad virtually had the street to himself.

And TV? When I was born there WAS no TV service in England. People used to listen to the radio! But not long after I arrived in this world, the BBC started broadcasting to the nation. Well, to the one per cent of houses that owned TVs that is. And at first we didn't own one. Mrs Richardson (Richie) next door did. It was a 12 inch black and white one but we all crowded into her house to watch it whenever we could.

Then WE got one, but it was never in the living-room. It had a room to itself - the 'front' room where we used to retire to at first to read in, then it became the 'telly' room. There was only ONE channel - the BBC and they only broadcast for a few hours a day, and even then there would be frequent 'interludes' where no program was on. During these times they would show things like 'The Potter's Wheel'. No sound, just a man making pots! In 1955 a second channel started up, called ITV. This channel had adverts!!! (The BBC never did and still to this day does not carry adverts). As a way of spoiling the opening night of ITV, the BBC who had the monopoly for radio broadcasts, 'killed off' one of the top characters in its daily soap-opera, "The Archers" (still broadcast daily even now, 48 years later) Grace Archer, in a tragic fire. It seems incredible now but many people preferred to sit and listen to the radio soap than watch a new station's opening night on TV.

Oh, and we had no fridge until the sixties, and no freezer until well after that. How did we keep food cool? We put some in a box outside and believe me in England in the winter that was just as effective as using a fridge. And, Madison Rose, no telephone until the seventies, and of course in those days there were no cell-phones, no computers, no stereos (we had a wind-up record-player that played 78s) no MP3 players, no walkmans. Not much of anything, in fact, but we were happy, and that's what counts!